DOES YOUR HORSE HAVE BREATHING DIFFCULTIES?

Energys® HERBIC is intended for moderately active or sports horses or leisure horses. HERBIC contains chopped hay and a herbal complex, which has a beneficial effect on the horse’s respiratory system. Herbic has been the best-selling feed from the premium Energys® range for many years.

The herbal complex (rosemary, mint, nettle, basil, fennel) in Herbic feed promotes the horse’s health, particularly for horses who are sensitive to changes in the weather and who tend to suffer from respiratory difficulties or colds in spring and autumn. We have very good references for Herbic feed from our customers and field veterinarians for feeding to sensitive horses in the winter months. The menthol essential oils, which the horse inhales when eating Herbic, also have a beneficial effect on the upper respiratory tract.

Herbic also contains yellow and black oats, which should be fed to horses with regular activity, or which spend more hours in the paddock a day.

Feeding large amounts of Herbic to horses with limited activity could lead to swollen legs or excessive sweating. Oats play an important role in the Herbic recipe as a source of fats and structural fibre. Oats are purposefully included in the Herbic recipe for their good qualities in promoting digestion and maintaining the vitality of the intestinal flora.

Oats may produce so-called “hot energy” in some horses, when they become more high-strung and this type of energy also exaggerates their temperament and makes them harder to control.  Herbic does not contain a large amount of oats, so if the customer does not have any badexperiencee with feeding smaller amounts of oats, they can include this excellent feed in their horse’s feed ration in smaller quantities without any issues.

Energys® HERBIC muesli also contains a mixture of heat-processed grains such as young corn and barley. These grains are partially puffed, which is a type of heat processing where the surface of the grain is expanded and digestibility is increased, because the strong links been the glucose molecules in the starches are broken down.

The Herbic recipe also includes a source of protein and structural fibre in dried alfalfa and pea flakes,  a source of fat - the excellent and beneficial flaxseed oil and also sunflower oil, and molasses are added to Herbic as a source of simple saccharides and also make the feed more tasty and increases the cohesion of the pellets.

The herbal complex in Herbic has a positive effect on feed intake (basil, rosemary, fennel, mint) and particularly on the respiratory tract (basil, mint, nettle).

Thanks to the herbs it contains, Herbic promotes good digestion (rosemary), willingness to eat (basil), acts against bloating (fennel), cleanses the respiratory tract (basil, fennel, mint), acts as an anti-nettle and detoxifying agent (nettle, rosemary) and has a positive impact on sugar metabolism and IR-insulin resistance (nettle).

Herbic feed is certainly the best feed for horses with breathing issues out of the entire ENERGYS® range. It can be included in the daily feed ration of active leisure or sports horses. 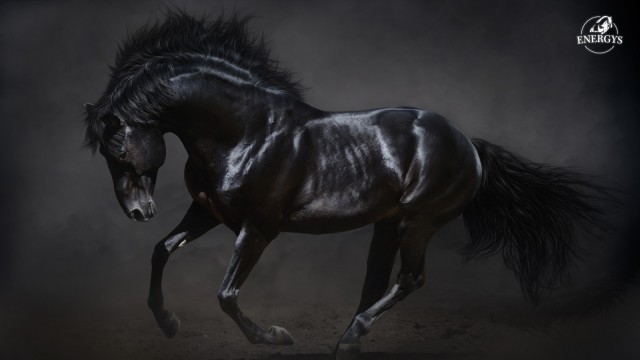 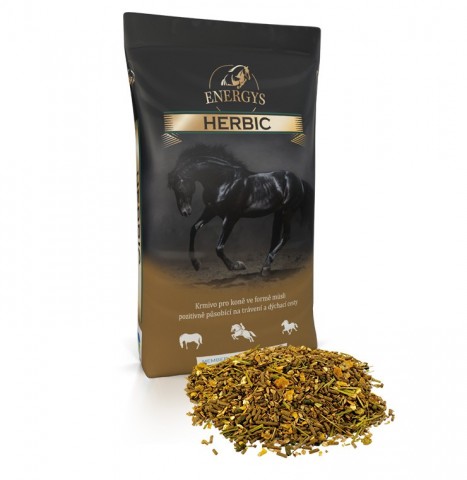